Royal Port Alfred Golf Course is in St Andrews Road at Port Alfred, which is on the coast more or less halfway between Port Elizabeth and East London. The club celebrated its centenary in 2007 and was granted its 'Royal' prefix when the Prince of Wales visited in 1927 - today his putter is mounted in the bar.

Full of humps and hollows, Royal Port Alfred is a challenging and often windswept layout. As many as 300 rounds are played per day at the height of the season in December, but the course is quiet outside of school and university holidays in the months from February to October. 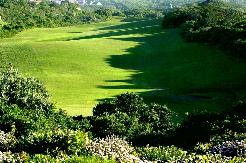 With gently rolling topography and wide sweeping views of the distant Indian Ocean, this course offers many interesting challenges. Royal Port Alfred is one of our favourites and a pure delight to play. Each hole has been allocated its own name and the members refer to them as such, not by their hole numbers. This club is one of the friendliest to visitors and has many characters among its membership. The late Hugh Kelly, a former member of St. Andrews in Scotland, was one such great character and probably one of the greatest benefactors to the game of golf in South Africa. His legacy lives on at Royal Port Alfred.

Signature Holes: The par 5 Shelly Beach (featured above and sometimes referred to by members as Shelly Bitch - when they carve their drives or seconds into the bush) is a superb Hole. Requiring a straight drive from an elevated tee, the longer hitters are tempted to go for it with a blind second shot, to a well bunkered green surrounded by bush. Greenmantle is another delightful hole where one drives from a high elevated tee, over bush to a verdant fairway below that has thick bush close to the right hand side.

We just love this golf course - it's a favourite.
Add to Holiday Basket 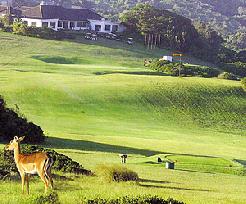